It always struck me that research inside the Fed seems to produce answers closer to the views of Fed officials than does research outside of the Fed. Perhaps my experience of reading a speech by Ben Bernanke one morning and attending a workshop by a Fed economist that found exactly his guess of the (implausibly large, to me) effects of QE that afternoon colored my views.

Figure 5 gives some sense of the result: 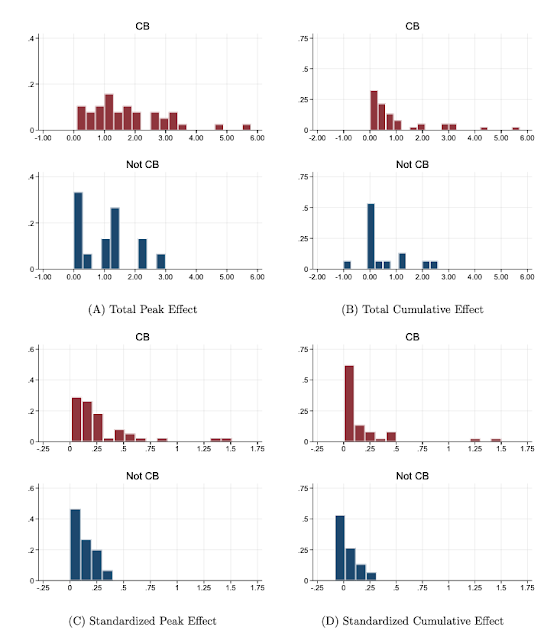 The “standardized” results scale the size of the QE programs to make sure authors are not comparing QE episodes with different sizes, and are thus a better comparison.  The “peak” vs “cumulative” effects mean this:

One of my frustration with central banker speeches on this point has been their confusion of announcement, impact, peak, and cumulative effects. The, price pressure,  portfolio imbalance, segmented market view of QE might make sense of a temporary impact, but central bankers regard estimates of the announcement or impact effects as estimates of a permanent effect of QE.

The paper summarizes several mechanisms, but it’s not hard to imagine subtle and individually benign reasons why a researcher in any institution might want to work hard to support the official position of the institution he or she works for, or positions that make the institution seem more powerful, or might just want to spend more time on research that seems to be going that way. Institutions can be systemically biased even if individually unbiased. Many friends tell me that there is no pressure to conform to the party line.

An institutional view is not necessarily a bad thing either, when institutions compete. There’s not much woke anti-capitalism coming out of Hoover. We’re allowed to do whatever we want, but it’s not a very productive environment for that sort of work. But there are plenty of other institutions to advance such causes, even at Stanford, and we compete in the marketplace of ideas.

The huge central bank and international institution research staffs are a much less competitive environment, especially for the ears of policy officials. And policy officials especially should be aware of the great danger that their advisers tell them what the advisers think they want to hear. If I were Fed chair, I would assign someone to be Devil’s advocate at every meeting, his/her job to say “this is all BS.”

International central banks are headed off to stop climate change by de-funding fossil fuels. The Fed is headlong becoming involved in inequality, social justice, and race. The IMF is also rushing headlong to these issues, advocating climate and inequality concerns as top priorities for central banks. The danger of in-the-bubble, what-the-boss-wants-to-hear research in these contentious and politicized areas seems even stronger, and the incentives against questioning the in-the-bubble consensus larger when there is more virtue to signal and opprobrium to avoid than on the question whether asset purchases raise GDP.

A suggestion for the authors, confirmed by talks with central bank staff assigned these unpleasant tasks: For your next paper, evaluate in vs. out of central bank research on measuring the risk of climate change to “financial stability.”

See the excellent comment by “unknown” on procedures the Fed follows to try to fight groupthink. ECB, IMF, BIS, ETC, this is at least an important institutional step.

I received an eloquent email from a friend who works at the Federal Reserve, emphasizing that Fed researchers and my correspondent in particular are not pressured, and they feel free to disagree with conventional wisdom both in written research and with internal opinion. This mirrors my experience. I know a lot of researchers at the Fed, ECB, etc. and individually they have all been very honest people who would never dream of skewering a result one way or another. But somehow Fabo et al’s bias creeps in. My “individually benign” paragraph above needs emphasis. Selection bias rather than any internal or external pressure to come up with the right answer is a likelier explanation. I have observed people at the Fed just choose not to work on things — avoid QE, for example — that they knew would cause a fuss.

I just found out about the Applied Critical Thinking project at the New York Fed. Bloomberg news calls Meg McConnell the Black Swan Hunter with a mandate to “poke holes in the most basic assumptions that central bankers make — which can lead to big policy mistakes when they’re wrong.” As one who has explored the possibility that raising interest rates (permanently and preannounced) might raise inflation, that QE has no effect at all, and other heresies, and found them more plausible than you might think, and also has one who has examined the deep foundations of conventional wisdom and found a whole lot less in the foundations than you may think, three cheers for Meg, and for John Williams (NY Fed President) who I presume commissioned this effort.

Can formalized internal doubters counter the forces of groupthink? It will be interesting to see. At least that the Fed is aware of the problem is good to know.

Pronouncing, a Python interface for the CMU Pronouncing Dictionary